Trim Down Club > Articles > All About IF > Artificial Sweeteners: What’s the Catch?

“Diet” sweeteners promise to be low-calorie and to help you lose weight. In reality, the opposite is true. And the results? Frankly, dangerous. These are the artificial sweeteners to avoid and healthier alternatives.

Total Shares 0
Be the first to share this article!
TrimDownClub, Nov 05, 2014

Why Artificial Sweeteners Were Invented—and Are Used Today

Almost everyone likes sweets to one degree or another. (In fact, many of us would say they are our biggest craving.) This is why artificial sweeteners were invented: to sweeten food without increasing its caloric value. Saccharin was the first in 1886, and since then many other variations have appeared. Sugar and artificial sweeteners are also the not-so-secret ingredients the food industry uses to make us eat more than we intend to and more than is good for us. 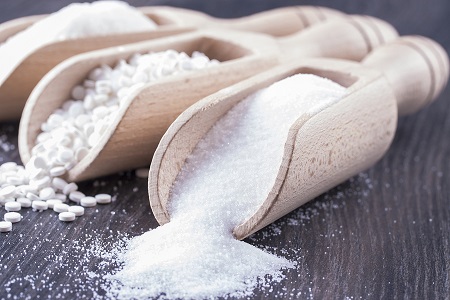 Artificial sweeteners are far sweeter than sugar, so it takes just a tiny amount to make a food addictively sweet—but because ingredients are listed by weight, the listing of, say, sucralose (brand name Splenda®) in last place normally wouldn’t raise eyebrows.

Up to a certain level, called the bliss point, the sweeter the food we are eating, the more most of us want to eat.

Sugar—hiding under dozens of names and formulations, including agave, evaporated cane juice, fruit concentrate (which is especially popular in the “organic” and “natural” foods markets), honey, molasses, as well as high-fructose corn syrup—are instant energy for your body. On the other hand, sweet-tasting plants are safe to eat for the vast majority of people, because they contain fructose, a different type of sugar.

For most of human history, food was scarce and energy-rich food was even scarcer, so our brains adapted to that reality by telling us to eat more of anything sweet. And our brains still respond that way, even though most of us have easy access to lots of calorie-dense food. However, when we are satiated, our bodies normally send signals to the brain that we’ve had enough to eat and it’s time to stop.

How Artificial Sweeteners Disrupt That

Artificial sweeteners are an attempt to have our cake and eat it too, but our bodies don’t seem to work that way. Your brain associates sugar with calories, or energy, that your body can use. But artificial sweeteners have very, very low caloric value: when your brain tastes the sweetness and expects calories but your body doesn’t report back that, “Yes, this sweet food is high in calories”, your brain says, “Where are the calories? What?!? No calories?!? Time to slow the metabolism and eat more food!”

Aspartame (sold under such brand names as Equal® and NutraSweet®) is the most popular artificial sweetener in the United States and it is 90% phenylalanine + aspartic acid, two amino acids. When you eat foods containing aspartame, your body quickly metabolizes that aspartame back down to phenylalanine and aspartic acid, which are known to quickly stimulate your production of insulin.

Insulin, of course, pulls glucose from your blood to store it as ready energy in your muscles and liver (glycogen) or as a long-term reserve (fat). Increases in insulin means that this glucose will be routed to fat storage, leaving you hungry.

0 Calories ≠ 0 Effect on Your Health, Your Waist, or Your Weight

In animal studies, rats fed artificially-sweetened yogurt ate more and gained more weight, especially fat, than rats who were fed yogurt sweetened with glucose.[1] And while those were rats, when people drank 1 or 2 cans of full-sugar carbonated beverages a day, they increase their risk of becoming overweight or obese by 33% in 7 to 8 years. But those who drank an equivalent amount of “diet” beverages increased their risk by 65%.[2]

Another study, this one on mice, found that when they were fed aspartame, saccharine or sucralose[3], they had significantly higher blood glucose levels than mice who ate either no sugar at all—or sugar. Then the gut bacteria from the sweetener-fed mice was transplanted to mice who had never eaten sweeteners and had been bred to have no gut bacteria. They quickly developed higher blood sugar levels.

People who eat products with artificial sweeteners often eat more than those of us who don’t. Many a time, we tell ourselves, “I had a diet soda so I can eat real ice cream—and more of it.” But if we ate, say, an entirely sugar-sweetened root-beer float, most of us would simply eat either a small one or have a larger one as an infrequent indulgence. In fact, we might not even want a big one because our bodies would perceive the caloric value of that sugar.

The reasons for this go far beyond the havoc artificial sweeteners can wreak on your metabolism.

Everyone Needs a Sweet Treat Now and Then

Because sweets are just pure joy for the mouth. And the truth is, reasonable amounts of sugar generally won’t harm your waistline or your health. (If you’re diabetic, check with your healthcare provider.)

The key is reasonable.

The World Health Association’s recommended maximum daily amount of added sugar (including natural-sounding sugars like “fruit juice concentrate”): 25 grams per day, which comes out to just under 6 teaspoons.[4]

The average American consumes about 189 grams, or 47 teaspoons, of added sugars and artificial sweeteners a day.[5] That’s about 756 calories from sugar a day, and because all calories are not created equal, your body will store much of that sugar as fat. This tremendous amount of sugar is, in itself, also the most significant factor in metabolic syndrome, leading to the lifestyle diseases of obesity, diabetes, and heart disease.

There are no two ways about it.

Artificial sweeteners are bad for you because they

That said, there are 4 relatively natural, non-caloric sweeteners that can help you wean yourself from the mountain of sugar and artificial sweeteners that are hiding in most of the foods we eat. They are: monkfruit sweetener (Monk Monk Fruit in the Raw, Nectresse®, lo han guo), unprocessed Stevia powder/liquid/syrup, erythritol (if your use is generally low; erythritol is a sugar alcohol, which in large quantities can have undesirable gastrointestinal side effects.), or inulin (from chicory root). Inulin has the added advantage of being a pre-biotic, meaning it can help good gut bacteria flourish and help suppress appetite.

But these sweeteners should be a method to handle sugar cravings as you detox from added sugars and artificial sweeteners.

On a daily basis, fruit is by far the best way to satisfy your sweet tooth. Fruit has vitamins and minerals and enough fiber that it slows the absorption of sugar into your bloodstream so you get a nice glow of energy along with the sweet taste. And it’s very hard for most people to eat so much fruit that it contributes to diabetes or obesity. Fruit can and should be an everyday indulgence.

Despite what the food and beverage industry wants us to believe, sugar is not a food. Food isn’t just sweet: it’s earthy, bitter, hearty, tangy, sour, salty, creamy, savory in a million different combinations. But our appreciation for all those wonderful tastes is being extinguished by the food-like quantities of sugar and the overwhelming sweetness of artificial sweeteners in prepared foods.

Sugar? Belongs in sweet treats you totally love that complete all the other flavors of your meals.

To learn how to eat great food without feeling deprived—and still indulge your sweet tooth without triggering fat-storing, click here.