Can a Gluten-Free Diet Actually Cause you to Become Overweight?

During the past year, fad-type gluten-free diets have swept through several nations.

Once reserved for sufferers of celiac disease – an intolerance to gluten that results in severe malabsorption and malnutrition – the gluten-free diet has become somewhat erroneously associated with slimming, due to the linking of milder gluten intolerances to bloating.

However, alongside a few success stories, many already well-nourished people have actually gained weight on a gluten-free diet. The reason: sometimes substitutes will make you fatter.

Total Shares 0
Be the first to share this article!
TrimDownClub, Feb 06, 2013
My good friend, who likes to describe herself as “well versed in diets,” decided to try a celebrity-endorsed gluten-free diet, and not just because it was the only trend she hasn’t tried yet. 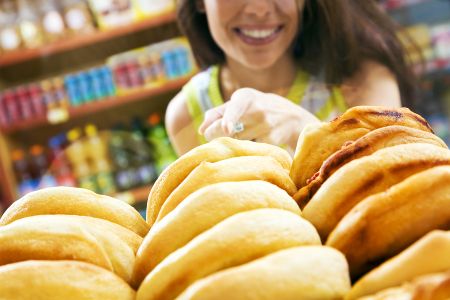 Better yet, she had read that fit celebrities, such as Gwyneth Paltrow and Raquel Welch, followed this diet, and that it had slimmed down Oprah’s waistline – and she was hoping that the magic would do the same for her. However, the stardust blinded her from common diet sense.

She said that her expectations of the diet were realistic. “After being tormented by killer diets, some of which made it difficult to function at work and one of which even made me pass out in the mall, a gluten-free diet seemed like a picnic. I knew I’d have to give up a few things, but the “permitted” food list was almost endless: chicken, fish, vegetables, fruits, cheese, dairy and what not. I checked the internet and found plenty of replacements. Instead of pasta, quinoa and potatoes, and instead of regular bread and bakery treats, special versions. What can go wrong?”
She didn’t declare herself an anti-gluten freak, she explains. She told her family and herself that she’s trying something new just to get rid of 4 pesky kilos that wouldn’t come off.
A month-and-a-half after filling her pantry with expensive products labeled “gluten-free,” she jumped on her scale and became queasy. Not only did she not lose weight, she gained some. Instead of 4 excess kilos, she had 8.

The gluten-free diet is still considered to be very popular in the United States, but the attitude towards it has changed lately. Today the number of professionals, doctors, and dietitians that say out loud that a gluten-free diet may help some people feel better by making them feel less bloated and heavy, are saying that it won’t help you lose weight, and is not necessarily for everyone.

As predicted, the companies behind the gluten-free products are waging a battle, mostly likely brought on by the preceding low-carbohydrate craze that took a large portion of their business away. During the past three years, the gluten-free market has tripled itself and conquered whole shelves, not only in the health-food stores, but in every local supermarket required to supply its customers’ demands.

In the past two years, the availability of gluten-free products has become comfortable and diverse. In New York, you can find stands selling hot dogs in gluten-free buns, pizzas, and beers. Parents that have become followers of the method send their children to school with gluten-free energy bars in their backpacks.

The variety is large and diverse, but also confusing and illusion sowing. Surveys conducted by gluten-free manufacturers reveal that only 12% of the consumers buy it for medical reasons, 50% buy it believing it is health food, while 30% invest a lot of money in them hoping to lose weight.
Therefore, whenever an objection is heard, companies are quick to defend their products and return the attack. The producers claim to have a huge database of satisfied customers that were able to shed tens of kilos due only to gluten-free eating.

And in the middle of this battle, you can find the little “guy,” confused and helpless. Gluten or gluten-free? What is it? Who is it good for? And who should you believe?

Gluten is a protein found in several types of grains, including wheat (including spelt), barley, rye and oats. Since it doesn’t dissolve in water, it functions to hold the flour components together, and allows their transformation into such things as dough. It can be found in breads, pastas, pizzas, cakes, and cookies, as well as beers, sausages, soups, dressings and basically anything that might contain breadcrumbs or flour. It is also the primary component of a traditional Japanese meat substitute, seitan, that is increasing in popularity around the world.

However, there are those unable to digest it. The most notably affected are celiac sufferers, who constitute 1%-2% of the population. Celiac disease is an autoimmune disease in which the immune system cells accidentally see gluten as toxic, and attack the small intestine’s cells during its digestion, causing malabsorption not only of the gluten, but of most other nutrients. In its most severe form, it eventually causes malnutrition and growth problems, low bone density, infertility (in both genders), Crohn’s disease, cancer, etc. In its milder forms, it causes bloating, abnormal bowel movements (constipation and/or loose stools), anemia, lactose intolerance, and/or ezcema (a skin disorder). Celiac disease doesn’t have a cure, but strict avoidance of gluten-containing foods eliminates its symptoms.

Why gluten-free is not always the answer

A typical gluten-free diet, containing processed gluten-free substitutes like ultra-refined bread, pasta, and cookies, is high in “empty” calories and simple carbohydrates, and therefore isn’t suitable for someone trying to lose weight. Sugar and fat are also gluten-free, and often appear together in products that counter your weight loss efforts. These foods have been shown to actually increase appetite and decrease willpower. Many dieters tend forget that portions even of “magic” foods such as gluten-free substitutes need to be controlled.

It is true that some celiac patients may lose weight after switching to a gluten-free diet because they discover that many of their favorite foods are no longer available to them. However, an incomplete diet is not a recommended way to lose weight.

People who have lost weight while eating gluten-free have also reduced intake of sugar, fat, and junk foods, and have started exercising, drinking water instead of soft drinks, and reading the small print on foods label to control what goes in their bodies.

If a gluten-free diet is necessary, it should be a component of a healthy lifestyle, with nutritious food habits adequate physical activity. In order to attain and maintain a healthy weight, you need a menu consisting of lean proteins, large amounts of a variety of vegetables, controlled amounts of fruits, and whole grains. If gluten-free is part of the equation, the whole grains are such things as brown rice, quinoa, amaranth, and buckwheat groats. And of course, portion control is always key, regardless of gluten.