Coconut has long been a staple in the Far East and a treat in the western world. For many years it had an almost unanimously bad name in the health arena (along with another “tropical” vegetal fat source, palm) due to a high proportion of saturated fats – frequently linked to modern day risks for cardiovascular diseases among others. With scientific research increasingly pointing to benefits of coconut products, more and more people are taking note.

Total Shares 0
Be the first to share this article!
TrimDownClub, May 16, 2013 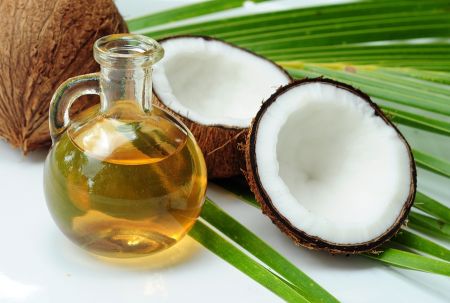 Coconuts contain a large quantity of water, especially when young. This water – also known as juice – contains virtually no fat, and is popular as a beverage. More mature coconuts yield the edible “meat” for which coconut is best known, and from which oil and milk products are made for both food and skin/hair care uses.

Coconut oil is made by drying and heating mature coconut flesh at low temperatures to enable moisture to evaporate, leaving coconut oil. When the oil is made directly from fresh coconut – as opposed to dried, preserved ‘copra’ – it is considered ‘extra-virgin,’ and just as with olive oil, is associated with the greatest degree of benefit.

Coconut oil is about 90% saturated fats, higher than in butter (≈64%), beef fat or lard (≈40%). Because of the high saturated fat content, the oil is solid below a certain temperature.

Coconut butter is the coconut version of a nut butter—simply the coconut flesh pureed into a smooth spread that is actually slightly lower in fat than coconut oil.

However, the make up of saturated fats in coconut appears to lend a slight advantage compared to other high-saturated-fat foods. The fat with the highest concentration in coconut is ‘lauric acid,’ shown to increase HDL or ‘good’ cholesterol, which is somewhat protective of the cardiovascular system. In contrast, the saturated fats in palm oil, butter, and lard are mostly palmitic acid, which is considered a high-risk fat.

Indeed, some studies have demonstrated positive responses to coconut fat in terms of increased HDL. It should be noted, however, that much of this research has been conducted in populations in the Far East and South Pacific, with long historic and personal exposure to coconuts – a 1981 study of South Pacific islanders noted that 60% of their diet consisted of coconut fat – meaning their bodies have become accustomed and may react differently than those in western countries. Further, observations of high coconut fat consumption among lean people with low rates of chronic disease do not control for age or physical activity, both of which play significant roles in fat-related health. Other studies showing benefits of coconut fat have been short-term, meaning it is not certain what the long-term effects may be of greater versus moderate consumption, particularly in a western population. This is not to say there is no benefit, but there is reason to proceed with caution.

Coconut oil ‘medium-chain triglycerides’ or ‘MCTs’ (also known as medium-chain fatty acids, or MCFAs) have been used medically in patients with digestive system disorders, including liver disease, as well as to treat seizures. These are generally given in purified form and often administered intravenously in very sick people. Therefore, most of the supporting research in humans also tends to be short-term.

Lauric acid is converted in the body to an antibacterial and antiviral substance called ‘monolaurin’. Human milk naturally contains ready-made monolaurin – one of the reasons human milk is considered immune-boosting.

Coconut flour is made by grinding of dried whole coconut flesh. Part of its appeal is that it offers a relatively healthy alternative for gluten-free baking, and another is the delicious taste. 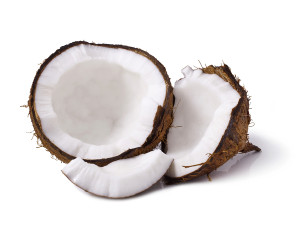 Coconut flour offers 16 grams of protein per cup, and that same cup holds 40 grams of fiber with only 24 grams of available carbohydrates—given that the average portion size works out to be about 2 tablespoons, which means it contributes virtually none. That’s a very attractive option for people who have conditions sensitive to simple sugars (such as diabetes and hypertriglyceridemia). It’s also worth noting that the fiber offered is largely insoluble—that means it’s the kind of fiber which will add bulk to your stool, allow you to feel full, help prevent constipation, and support the health of your colon.

Like the rest of the coconut, most of the fat in the flour is saturated, including MCT. Other featured nutrients include vitamin B6 and the essential minerals iron, magnesium, selenium, zinc, and particularly copper and manganese.

If you choose to make a flour mixture with coconut flour, try to make it up to 25% coconut flour before adding the others, and be sure to use more liquid than you would with other flours. For more on its use in baking, click here.

Coconut milk is produced by mixing coconut water and flesh, and pressing the mixture to produce the milk. In addition to several key vitamins and minerals – folate, iron, magnesium, potassium, selenium, zinc – coconut milk also contains MCTs. Its protein content varies widely from none to half the amount in dairy or soy milk. It is available fortified with calcium and vitamins A, B12, and D like other vegetal milks. ‘Light’ coconut milk has a higher percentage of water compared to coconut, and is therefore lower in fat.

Coconut water and juice are one and the same, referring to the liquid found inside of young coconuts. Coconut juice is clear, with almost no fat, and with little to none of the characteristic coconut taste. It provides some protein and vitamins, and is a source of minerals, particularly potassium – as much as in a cup of sliced banana or one large whole banana, but with less than half the carbohydrates. Because of its impressive content of electrolytes, coconut juice has long been used as a rehydrating treatment, medically in cases of significant to severe diarrhea, as well as in healthy individuals as a sports drink.

A Word of Caution

The consensus among scientists and healthcare professionals for most people is currently that there is no problem using coconut oil occasionally and sparingly, in either its liquid or naturally solid form; the same applies to coconut milk.

For individuals with digestive system disorders, including liver disease, use of coconut fat may be particularly advantageous and the usual risks minimized. Because of the interaction of various issues in the body in these cases, these benefits do not always outweigh the risks in healthy individuals.

For most westerners, coconut fat is considered to have a higher risk profile than other recommended fats such as olive, flaxseed, and nut oils – some of which have benefits comparable to those attributed to coconut, but without the concerns associated with saturated fats. However, coconut is definitely preferable to other high saturated fat products, such as animal fats – butter and lard being the most common – and palm oil, as well as to hydrogenated vegetable fats high in trans fats, which have been linked to cancer. As such, coconut fat is considered a substitute for fats already in the diet, and not as an addition.

Caution for use of coconut juice is unrelated to fat, but rather to the very high content of potassium, which can add up quickly and become toxic if consumed in large amounts in sensitive individuals, such those with impaired kidney function.

Finally, it is important to use coconut products from natural, unprocessed sources, and to pay attention to additives such as sweeteners and flavoring agents.

Get more health and weight loss tips and advice by clicking here.