Turmeric: Nothing But Health

Trim Down Club > Uncategorized > Super Foods > Turmeric: Nothing But Health

You can find it in almost any household, and it leaves its mark on any food you add it to. Give some respect to turmeric.

Total Shares 0
Be the first to share this article!
TrimDownClub, May 23, 2013 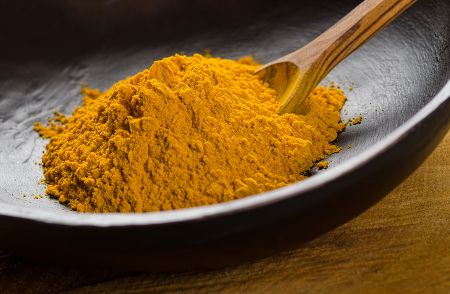 Turmeric is in almost every household. It’s always there, hidden, not fussing or asking for any PR. We take it off the spice rack mostly when we want to give our food an orange-yellow color or give a boost to a characteristic curry flavor, but its power isn’t in the color or the taste, but rather in its health benefits.

What is there to know about turmeric?

Turmeric is a perennial plant, from the Zingiberaceae family, native to southern Asia. The plant has a tuber-like rhizome, which is the fresh form of turmeric.
Before it was used as a spice, turmeric was used for painting.  Because it releases an orange color, much like saffron, turmeric was popular in certain countries as a replacement to the expensive saffron, and that’s how it got the name Japanese, Indian, or Chinese saffron. The turmeric is also used in the cosmetics industry for producing sun protection creams.

Turmeric contains 3% curcumin, which is the active substance. In its fresh form, turmeric contains potassium, vitamin C, beta carotene, and antioxidants. In Eastern Indian medicine, turmeric is considered to have healing properties for liver problems, rheumatism, coughs, and sinusitis, and in Chinese medicine, it is used to relieve abdominal pain. Turmeric is also known to help treat infections and help heal wounds and burns.

In medical studies, turmeric has been tested as a cancer treatment (even though contradictory findings have recently surfaced), to improve status of Alzheimer’s patients, and to treat liver problems.  Thus, it’s no wonder that you can get capsules with concentrated extracts of the active component, curcumin, in pharmacies.

Note that curcumin alone is poorly absorbed and utilized by the body. Therefore, if using supplements, it is important to take them in a form or with a compound that enhances bioavailability, such as natural piperine from black pepper.

Other than fresh turmeric, you can also find whole dried turmeric and dried ground turmeric.

How much should you use?

Turmeric tends to take over the food it’s in, and if too much is used, the food may become unpleasantly bitter. Therefore, you should only use a pinch of it, and even experiment until you reach the desired amount. For instance, in stews containing 50% liquids and 50% solids, you should add 1 flat teaspoon of turmeric for every liter of liquid. In a dry mix intended for roasting meat, though, you should add turmeric in a ratio of 8:1 of all of the spices (with turmeric being the 1).

For dosing of curcumin, it is best to consult with a health care professional licensed in alternative or complementary medicine.

Turmeric gives food an orange-yellow color, but what about its taste? Turmeric doesn’t really have a prominent taste. Its purpose is to give food color. In different spice mixes, like curry powder, it is used primarily to deepen the coloring of the spices and the food.

Try (or better yet, don’t try) to spread some turmeric on a countertop, and you’ll find out how hard it is to remove the stains. Turmeric acts as a particularly strong food coloring. To remove turmeric stains, immediately wash the object that touched it using hot water and soap, and don’t let the turmeric dry on it.

How to store turmeric?

All varieties of turmeric should be stored at cool temperatures – in summer in the refrigerator, while in winter it can be left outside – though not in a bag, where it can become moldy.