What Happens to Kids Who Eat French Fries for Breakfast?

Trim Down Club > Articles > All About Wellness > What Happens to Kids Who Eat French Fries for Breakfast?

Even though the US is considered to be the capital of global abundance, 50 million Americans – among them 17 million children- suffer from food insecurity.  The movie “A Place at the Table” refutes the image of the richest country in the world. 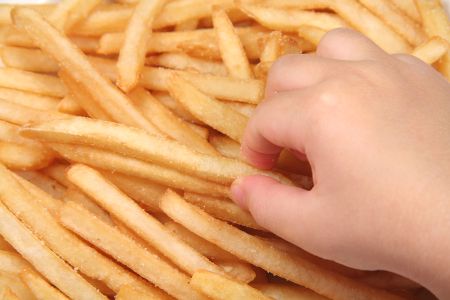 “I find it hard to concentrate sometimes during class, because my stomach hurts. I imagine the teacher as a banana and the rest of the class as apples or oranges.”  This is Rosie’s school experience, a fifth grader from Colorado.  She is just one of dozens of Americans who go to sleep hungry every night.

When discussing the topic of hunger, the United States isn’t usually the first thing that comes to mind. The richest country in the world is mostly known to be the land of plenty and has been ridiculed more than once for its inhabitants’ thick skin.

The movie “A Place at the Table,” however, refutes this image.  The documentary, featuring Jeff Bridges – who has been an activist in the fight against hunger for 30 years – presents the phenomenon through the eyes of Americans having trouble feeding themselves and their family members.  According to the US Department of Agriculture’s (USDA) data, 50 million Americans, among them 17 million children, suffer from food insecurity – a constant uncertainty of what they’ll eat the next day.

“There’s a common conception that this is only a problem dealt with by a marginal group, but it is, in fact, a common problem,” according to Laurie Silverbush, who directed and produced the movie with Christie Jacobson, in an interview with Reuters.  “Most Americans aren’t aware of the problem’s scope, because you can’t actually see real hunger in the US.”

According to Ms. Silverbush, one of the reasons is that many of the hungry people are ashamed to admit to the fact that they can’t afford the food they need.  “It is very hard to get help in the US – if you’re not starving, you don’t get help,” says Barbie Izquierdo, a single mom from Philadelphia, whose story is documented in the movie.

Izquierdo hopes that her two children will be able to break out of the cycle of poverty she was born into, and does all she can to feed them. Unfortunately for her, she earns two dollars above the eligibility threshold for food stamps.  Even when she succeeds in getting eligibility for food stamps, the monthly bonus only lasts for three weeks each month.

“At the last week of every month I go crazy,” she says.  According to her account, she sometimes reads Pizza parlors’ menus “just to get rid of my own hunger and feed the kids.”

US food stamp eligibility is based on the household’s total income.  For a three-member family to become eligible, their income cannot exceed $24,000 per year.  A member of the US House of Representatives, James McGovern  of Massachusetts, co-chairman of the Congressional Hunger Center. experienced the “food stamp diet” for a week, and revealed that it’s just not enough.

“Three dollars are the average food stamp’s value,” according to McGovern in the film.  “I had a budget and I went to the supermarket.  Shopping took a long time, because I had to think over every nickel, and the groceries were supposed to last for a week.  I was tired and agitated; I couldn’t drink coffee, because it was too expensive.  Some people live this way every day, and it’s just impossible.  For us, it was an exercise that was over after one week, but for millions of Americans, every day is another struggle.”

The eligibility issue isn’t the only thing causing difficulties for hungry people in the US trying to feed their children.  Izquierdo has to take a two-hour bus ride to reach a supermarket where she can get  nutritious products.  Most of the time, she feeds her children out of cans and ready-to-eat food trays, small and cheap varieties, since she can’t find or afford anything else.

Having access to healthy food is a serious problem in what is known as “food deserts” – rural and urban areas that have limited and rare access to fresh produce.  According to the USDA, nearly 14 million Americans live in these “food deserts.”  One of these deserts is Johnstown, Mississippi.

“No store around here sells fruit,” according to Ree Harris, a cook, talking about the town in which she lives. “What you have is French fries, ice cream, and cake.”

When your daily nutrition consists of cakes and French fries, no wonder that many of the 50 million hungry people in the US don’t fit the archetypal image of hunger we might have in our heads.  “Hunger and obesity are close neighbors,” according to Raj Patel, the author of “Stuffed and Starved,” which deals with the problem. “They’re both signs that there isn’t enough money to buy healthy food,” he adds.

In an interview with the New York Times, Jacobson explained the relation between hunger and obesity.  “Most people are prejudiced about the reason for people being overweight, and that is why we chose to film some of the movie in Mississippi, which is the state with the highest rate of food insecurity and is also the  state with the highest  percentage of cream.”

When milk is more expensive than a soda

Leslie Nichols, Rosie’s school teacher has first-hand experience with the hunger problem, and even today as an adult she is still ashamed to tell about seeing her mother struggling to put food on the table during her childhood, and resorting to the food bank’s services.

“This is a very problematic issue in our small community.  Rosie especially stood out, and I couldn’t understand what her problem was, it felt like she didn’t care what was happening in class and she didn’t feel school was important.  In the end, I understood that the problem was different – she was just hungry.”

Rosie isn’t the only child going to school hungry.  According to a report published by  accounting firm Deloitte, three  of every  five teachers in the U.S., have reported  teaching children who regularly come into school hungry.

“We’re binding the hands of our children,” said Dr. Jay Larry Brown , the author of the book “Living Hungry in America,” in the movie.  “We’re paying teachers to work with children incapable of learning.”

Learn more about the Trim Down Club.