Quinoa and buckwheat groats are pseudocereals rather than true cereals or grains, which means they are gluten-free–with all the nutritional benefits. Both are considered very healthy – rich in protein and calcium. Quinoa was even declared by NASA as the food to be taken on future space voyages, and both are considered ‘superfoods’.

Total Shares 0
Be the first to share this article!
TrimDownClub, Feb 24, 2013
Though common throughout the world, for years quinoa and buckwheat groats suffered from bad public relations in many western cultures. But these nutritional powerhouse superfoods are not “boring,” as some would have you believe.
With the growing popularity of gluten-free diets, these foods are becoming very popular alternatives that  can be prepared in numerous, interesting ways. 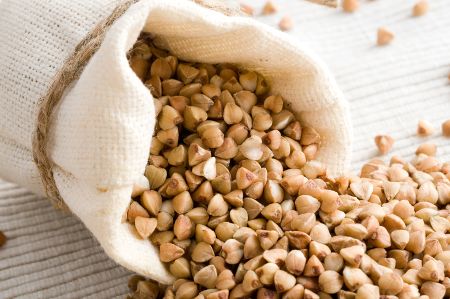 Many people are also becoming aware of the dangers of processed grains and flours, and are looking for more wholesome alternatives.

Learn more about the foods you should never eat in our presentation.

Quinoa: Royalty Among the Incas


Quinoa is pronounced kee-noh-uh. They are the seeds of a plant called goosefoot, which is not a member of the true grass family. As a chenopod, quinoa is closely related to species such as beets, spinach, and tumbleweeds. Albeit not being a member of the cereal family, quinoa’s nutritional properties are similar to those of cereals or grains, and is used to substitute for such foods.

Quinoa originates in the Andean region of Ecuador. Due to its agility and durability, the plant was able to prosper even under the harsh growing environment in the high mountains. There is evidence of it being a popular food even 6000 years ago.

Among the Incas, the seed was revered and referred to as a holy plant and was named “mother of grains”. The quinoa seed grows in a bitter casing, but the most commonly sold type of quinoa is always without the casing. Today, most quinoa is imported from Bolivia and Peru.


Buckwheat groats, or roasted buckwheat grains, are the seeds of a Polygonaceae family member. Though not a cereal, nutritional values are similar to those of cereals, and use is similar and as diverse as such common and newer staples as rice, barley, freekah, and millet.

Buckwheat groats, a delicacy which goes back further in time then quinoa, has been known for 8000 years, but only on the other side of the world – in China, migrating to the rest of Asia, and then Europe. Like the quinoa, buckwheat groats are hardy, succeeding in cold climates, acidic soils, dry climates, and harsh weather, known to even grow at a higher altitude than any other cultured plant – in the heights of Tibet. These properties have made it into one of the most common crops in cold regions like Russia, and northern China and United States.

Nutritional value: like the members of the cereal family, both quinoa and buckwheat groats contain mainly carbohydrates, but like seeds, they are also relatively high in protein. Both are gluten-free and are therefore appropriate for celiac patients other individuals with gluten/wheat sensitivities.

Quinoa has a nutritional advantage over buckwheat groats and wheat in that it has twice more protein, twice more iron, three times more calcium, and almost twice more magnesium than wheat and buckwheat groats. Most importantly, the protein found in quinoa contains all the amino acids we require in significant amounts, which is why it is called a whole protein. Due to quinoa’s rich nutritional content, it was declared by NASA as one of the foods to be included in future human voyages into space.
Buckwheat groats have a low glycemic index, which means that unlike wheat flour, its carbohydrates break down slower, which make them more filling for a longer period of time, with less of an undesirable impact on blood glucose and insulin. Buckwheat groat protein also has a better make-up than wheat protein, which has a poor amount of the amino acid lysine, with twice the amount of fiber compared to wheat, while boasting all the other beneficial properties.

How to Eat Quinoa and Buckwheat Groats


Types (yellow, red and black): There are minor differences in taste and texture between the different colors. While the red and black varieties are somewhat higher in minerals, all are considered high in nutritional value.
Preparation: Some people a sensitive to what they feel is a “bitter” or “soapy” taste attributed to quinoa’s  grain casing. This taste can be reduced by rinsing the quinoa in water, or soaking it for 1-2 hours, changing the water at least once.

Quinoa is cooked the same way as rice: two cups of water for every cup of quinoa, bringing to a boil, reducing the flame, then covering and cooking on low heat until the water finishes seeping, adding water as needed to attain the desired texture.
To enhance flavor, it is suggested to add vegetables (such as onions, leek, celery, carrots) and/or mushrooms, as well as herbs and spices (such as garlic, bay leaf, saffron, pepper). Another option would be to cook the grains plain, and after they are cooked to add them to cold salads –with dried cranberries (or currants or raisins), red onion, bell pepper, flavor-infused oils, fresh herbs, etc.

Quinoa can also be prepared as a sweet dish. Cook the quinoa plain, and when it is ready, mix it with cut up fruits, vanilla extract, and a little bit of maple syrup, with or without milk or yogurt. You can make a sweet and relatively rich in protein breakfast out of quinoa by serving it as you would cooked cereal.
Quinoa sprouts relatively quickly compared to other grains, beginning within 2-4 hours of being soaked in water. Quinoa sprouts can be eaten without being cooked, and can be added to salads and stews.

Products: Quinoa flour can be found in stores carrying legumes and spices. It can be used to nutritionally enhance baked goods and to diversify your palate. Since quinoa flour doesn’t rise, it is advised to mix it with wheat or spelt flour if a certain amount of rising is desired, or to double the amount of leavening agents such as baking soda and powder.
In natural/health food stores, you can often find puffed quinoa – like puffed rice or wheat. The use is similar – you can eat them with milk or use them in desserts, etc.

The leaves of the goosefoot plant are considered nutritious. They contain high levels of iron, calcium, magnesium, and various vitamins, as well as a high percentage of protein.


Preparation: Buckwheat groats have a very distinct scent and taste. Buckwheat groats can be made into a porridge or side dish at a lunch or dinner meal. They are cooked in the same way as rice: two cups of water for every cup of groats, with seasonings. Bring to a boil, then lower the heat and cook covered until the water finishes seeping. To make buckwheat porridge, use more water (2.5 cups for every cup of groats), and stop the cooking when the desired texture is attained.

To start sprouting, soak the grains for 1-2 hours, then put them in a fine strainer and wash twice within 24 hours. It is important to drain all the water. Within 1-2 days, you can see the beginning of a sprout (a tiny white stem), which signals that the sprouts are ready.

Buckwheat groat flour is a dark flour used to make pancakes, blintzes or Russian yeast pancakes. They can be made out of 100% buckwheat groat flour or can be combined to white or whole wheat flour, to enrich and diversify. Since buckwheat groats are gluten-free, making pastries out of Buckwheat Groats flour won’t rise very high.
Buckwheat groat noodles are beloved in Japan, where they are called soba. They require a somewhat shorter cooking time than regular wheat noodles. They have a mild taste like regular pastas, but with a somewhat more substantial texture, and can be used interchangeably also to diversify your plate. Traditionally, soba noodles are served in Japanese soup or with stir-fried vegetables and proteins.

Gluten-free beer: Since beer is usually made from barley, it contains gluten. In recent years, celiac patients have started drinking beer made with buckwheat groats as a gluten-free replacement for barley.

However you choose to eat them, quinoa and buckwheat groats are both super grains (that aren’t really grains) that are great for your body and for meeting your weight loss and health goals.