Are You a Meat Lover? A Glass of Wine May Help you Lose Weight

Trim Down Club > Uncategorized > Lifestyle > Are You a Meat Lover? A Glass of Wine May Help you Lose Weight

Red meat has long carried a bad reputation in the world of heart health. Recently, however, researchers at the Hebrew University in Israel corroborated what the French have long practiced: drinking a glass of red wine alongside a meal with meat reduces key risk factor for heart attacks. A similar effect was achieved when the wine was used in cooking the meat instead of consumed separately as a beverage.

Total Shares 0
Be the first to share this article!
TrimDownClub, Feb 12, 2013 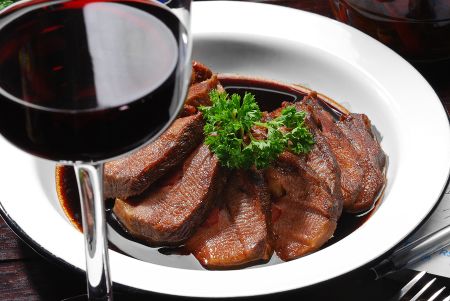 Red wine and meat: a winning combination in the fight against heart disease.
For anybody debating whether or not to drink red wine with meat: another “pro” from the pros.
Clinical research conducted at the Hebrew University revealed that drinking a glass of red wine while having a meal with meat can prevent accumulation of oxidized cholesterol in the blood. While concerns have long been focused on total and “bad” cholesterol (low-density lipoproteins, or LDL), a major culprit is actually cholesterol/LDL that has become oxidized – a source of damaging free radicals.
According to the researchers, natural components in red wine – known as polyphenols, particularly “resveratrol,” found in red grape skins –  prevent the oxidation of cholesterol released into the bloodstream after eating meat. Because there is a known link between LDL cholesterol and heart attacks, the combination between red wine and meat, according to the researchers, can be very effective in preventing heart attacks.

Basting in wine – very effective in taking down those cholesterol levels

During the research, the subjects were divided into two groups. One group had four days of meals containing dark turkey meat, considerably higher in fat and cholesterol than the light turkey known as a heart-healthy option. The group was asked not to eat other types of meat or fish. The second group also received meals consisting of dark turkey meat, but the meat was soaked in red wine before cooking. Another group drank a glass of red wine every day with their meal.
An increase in total cholesterol levels of 97% was recorded in the group that had meat without wine. The group that drank wine presented with the best results – the marker of cholesterol oxidation level did not rise. It was also found that those who had the wine-basted meat showed similar results to those who drank wine. The researchers claim that the reason for is likely the polyphenols in the wine, which exert antioxidant properties and may thus be preventive.

Another study published by researchers at Lassiter University reported that drinking a glass of red wine every day can help in preventing colorectal cancer, another deadly disorder associated with red meat consumption. According to researchers, resveratrol is known to have properties that may protect against cancers.

Even with these and similar findings, and the excitement about the “French Paradox” of high cholesterol consumption tamed by red wine, moderation remains the key to good health. Too much even of a good thing is still too much, and here is no exception. Though certainly better together, meat and wine consumption are still recommended to be limited to 3-4 ounces per serving, two servings per week.