4 Healthy Reasons Why You Should Eat Cucumbers

The cucumber has a reputation as a bland vegetable that doesn’t benefit your health much.  But the truth is completely different: cucumbers contain a range of nutrients and phytochemicals – beneficial nutrient-like plant compounds – that may help prevent heart disease, cancer, and skin problems.

Total Shares 0
Be the first to share this article!
TrimDownClub, Jan 15, 2014

Here are a few reasons why you should add them to your salad:

The cucumber, or its scientific name Cucumis sativus, is a tropical plant related to the Cucurbitaceae family, whose members include the pumpkin and cantaloupe.  Even though on a daily basis we include it among the vegetables we eat, it’s actually not a vegetable but a fruit.  It originated over 10,000 years ago in India and in certain parts of the Mediterranean. During the 17th century, greenhouses developed methods of growing it, and today it’s considered the fourth most- common “vegetable” in the world after the tomato, cabbage, and onion. 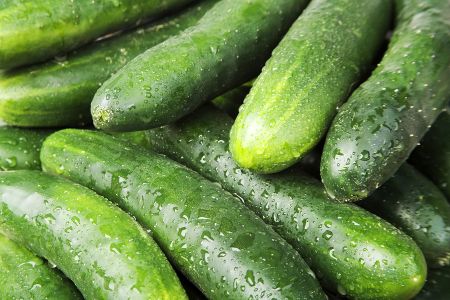 Fresh cucumbers contain mostly water, but they are also rich  in nutrition. The inner fleshy part of the cucumber is a great source of vitamin C and beta carotene that are powerful antioxidants, and also for folic acid.  The peel of the cucumber is rich in fiber and contains a variety of important minerals, including silica, which is important for hair and nails; potassium and magnesium, important for heart health, including blood pressure; manganese, important for building bone; and molybdenum, a mineral that plays a part in many enzymatic processes in the body.

The cucumber also contains vitamin B5, which has a role in creating energy, and vitamin K needed for proper bone formation and clotting processes in the body.  People on blood thinners, such as warfarin, should restrict their intake of vitamin K, and therefore cucumbers, to a strict and small amount set by a doctor, after  clotting has been tracked.

What are the cucumber’s nutritional advantages?

2.  Reduces the chance of heart disease and cancer – The cucumber also contains lignans, a group of chemical compounds found in plants related to the polyphenol family. Extensive research  found that  they reduced the risk for heart and vascular diseases and also some types of cancer (breast, uterus, ovarian, and prostate). Bacteria in our digestive system turn these lignans into materials that can bind to estrogen receptors and  supply anti-estrogen or estrogen-promoting activity – depending on the status of estrogen in the body.

3.  Contains antioxidants – Other materials belonging to the same family are flavonoids, acting as antioxidants.  Initial animal trials revealed consistent and clear evidence that extracts produced out of fresh cucumbers have antioxidant properties and anti-inflammatory properties (suppressing the Cox-2 enzyme). It also has been found that the cucumber contains substances called cucurbutacins, which have anti-cancer properties: they delay development and inhibit survival of cancer cells.  Many pharmaceutical companies are currently researching these substances, hoping their research will lead to development of new anti-cancer medicine.s Of course, human trials need to be conducted to confirm these effects from daily consumption of cucumbers.

Here’s a great recipe for Curried Chicken, Cucumber, and Scallion salad that makes this simple and healthy cucumber an absolute treat!

Find out more about 5 foods not to eat in our presentation.