The Health Price Tag on Hot Dogs and Sausages

Extensive research  of approximately half a million people conducted over 13 years in 10 European countries found that those who ate an amount equal to 2 hot dogs per day suffered from more heart attacks, cancer, and early death.

Limiting yourself to 20 grams of processed meat per day can save your life.

Total Shares 0
Be the first to share this article!
TrimDownClub, Mar 20, 2013
Eating processed products like hot dogs, sausage, bacon, etc., increases the risk of early death.  Researchers concluded that a diet based on processed meat causes heart problems and cancer. 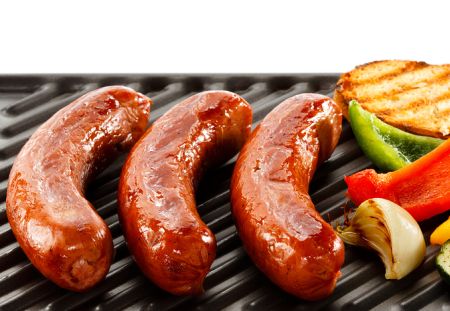 According to them, the damage is caused  by the salt and chemicals used to process the meat.

Throughout the study, researchers found that one of every 17 people participating in the research died  during those years.  However, those who ate over 160 grams of processed meat per day  (for example  two hot dogs)  were at a 44% greater risk of dying, than those who were content with 20 grams of processed meat per day.  In conclusion, nearly 10,000 people participating as subjects in the research died of cancer, and 5,500  others of heart problems.

Prof. Sven Rohmann of the Zurich University explained that a high consumption of meat, especially processed meat, is usually linked to unhealthy lifestyle habits such as smoking and obesity.

“Although smoking is a very bad habit and quitting smoking is more important than quitting processed meat, quitting eating the meat is still recommended as well,” said Prof. Rohmann.  According to her, if all the research subjects would not have eaten more than 20 grams of processed meat  a day, at least 3% of the early deaths would have been avoided.

According to the British ministry of health,  eating less than 70 grams of processed meat per day is recommended. However, according to the ministry’s representatives, a small amount of meat, even if it’s processed, has significant health benefits.

Ursula Arnes, of the British Dietitian’s Association also added that, “People who consume large amounts of red meat are also recommended to reduce their intake.”

The research only proves what we’ve already known

Dr. Rachel Thompson of the Global Fight Against Cancer organization said  the research results only add  to information that already existed regarding the risk of eating processed meat. “One of the studies we conducted  published in 2007 and  updated in 2011, showed that eating processed meats such as hot dogs, sausages and bacon l increases the risk of colorectal cancer,” she explained.

“If people ate only  10 grams of processed meat per day, it would cause a drop of 4,000 cases of colorectal cancer per year,” Dr. Thompson said and added that the organization suggests to completely avoid eating processed meat.

In addition, British health officials claim that people who eat more processed meat are simultaneously eating fewer fruits and vegetables. They generally  smoke as well, which doesn’t contribute to their general state of health.

They explain that even if people don’t stop eating processed meat completely, preparing it in healthier ways, like on the grill, is recommended.  It is also recommended to add  products such as chicken, fish and legumes to your daily diet, that are a healthy sources of  protein.

Learn more about the Trim Down Club’s healthy meal plan by clicking here.