Mushrooms often take a back seat when it comes to getting attention about nutrition. Most wouldn’t consider them to be a superfood, but they absolutely are.

Total Shares 0
Be the first to share this article!
TrimDownClub, Nov 28, 2013

Typically, mushrooms are an accompaniment to dishes like salads, burgers, pizza, omelets, or pasta sauces. Under-appreciated is an understatement. With the exception of the portabella mushroom, which is commonly used to replace beef or other meats in vegetarian burgers or simply as a steak, it’s rare to find mushrooms as a main ingredient in a meal or as an entrée.

Making mushrooms more of a main course is easy, tasty, and wise. Easy because there are so many different ways to include them in a more substantial way – there’s no shortage of recipes. Tasty because there are so many types of mushrooms, with a variety of textures, qualities, and flavors. Wise because mushrooms are loaded with health-promoting properties and phytonutrients, along with a smattering of essential nutrients. 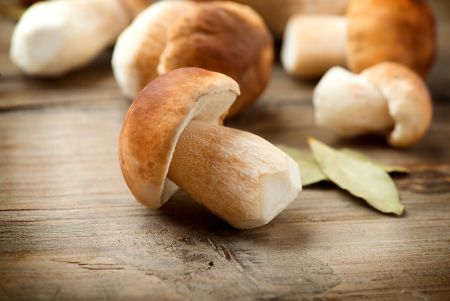 See what other foods the Trim Down Club recommends–and which 5 foods to avoid.

It is recommended that mushrooms be cooked before consumption, for two important reasons:

Where people struggle is with knowing how to include them as the main ingredient of an entrée, and how they can be used beyond their traditional role as a topping or accent.

Also called button mushrooms, they are one of the most popular varieties around. They come in three general sizes: small, medium, and jumbo. They can be pure white or off-white.

They have a mild woodsy flavor, and are commonly served in soups, salads, appetizers, and entrees – but can make a great side dish or vegan entrée. It is recommended that they only be consumed cooked.

Also known as brown mushrooms, they are very similar to white mushrooms in both size and texture, but have a more intense, earthy flavor than their white counterparts.

Like white mushrooms, crimini mushrooms should be eaten cooked. They can easily stand in for white mushrooms in any recipe or use as in salads, soups, and omelets, or as a side dish or entrée.

Portabella mushrooms are brown mushrooms that come in two general sizes – regular (fully-grown) and ‘baby’. They are considered the largest of the domestic mushrooms, with an impressive cap that can be 6 inches (15 cm) in diameter. They tend to have an earthy taste and are drier than smaller mushrooms, lending to their meatier texture.

It’s this texture that lends to the portabella’s versatility as a staple for vegetarian burgers and vegan steaks because they can be grilled; they hold up well to being baked, too. It is recommended that they only be consumed cooked.

Unique with their whitish-yellow gill-like structures running up their short, crooked stems, oyster mushrooms have a light to dark brown, gray or even a pale yellow, funnel-shaped cap ranging in size from 1 to 4 inches (2.5 to 10 cm).

They have a delicate, mild flavor with a velvety texture and can be used in a variety of dishes.

Famous for their woody and meaty taste, Shiitake mushrooms also have a large fleshy cap ranging from 5 to 10 cm (2 to 4 inches) in diameter which are tan to dark brown in color.

They have a soft and spongy texture when raw but have a distinct meaty flavor and texture when cooked. They are commonly found in Asian cooking and frequently used in stir-fries.

Probably the most unique looking of all domestic mushrooms, enokis have long, slender white stems with tiny, firm, dome-like caps.

One of the mildest-tasting mushrooms, enoki have a nice crunch and can be eaten raw or cooked. They are commonly found in Asian cuisine, but can make a great garnish for any salad, soup, or and sauce, as well as great sandwich or wrap filler in place of, or in addition to, the usual suspects like lettuce, tomatoes, onions, avocado, and sprouts.

One of the more sturdy looking mushrooms, King Oyster mushrooms have a stout, rugged-looking white stem with a light tan cap.

The sturdy stem has a thick flesh which is chewy from top to bottom, and unlike most mushrooms, won’t become too soft when cooked, but rather maintains its firmness. The flavor, while woodsy, is more delicate and sweet. These are used in French, Italian, Mediterranean, and Chinese cuisines, and stand up well to sautéing, stir-frying, and grilling.

More Nutrition than Meets the Eye

Not only are mushrooms versatile and good tasting, many may be surprised to learn that these seemingly unassuming plants pack some of the most powerful health benefits. They give a lot of bang for their nutritional buck. For very few calories (about 25 calories per 100g of mushrooms on average) they are an excellent source of key nutrients such as potassium, B2 (riboflavin), B3 (niacin), B5 (pantothenic acid), selenium, copper, and zinc, as well as a bit of good quality protein. And they’re sodium-free

Other health promoting properties of mushrooms are found in the non-traditional vitamin and mineral route. In Asian traditions, mushrooms are regarded also as medicine because of their apparent support for the body’s natural defenses. Mushrooms are packed with a unique antioxidant called l-ergothioneine, containing higher concentrations than either of the two dietary sources previously believed to contain the most: chicken liver and wheat germ. Studies have shown that shiitake, oyster, king oyster, and maitake mushrooms contain the highest amounts of l-ergothioneine, with up to 13 mg in an 3-ounce/86g serving. This equals forty times as much as is found in wheat germ. Antioxidants help to protect body cells and tissues against damage, much like a shield protects a warrior from the onslaught of an enemy’s arrow. This particular antioxidant is heat-stable, and therefore present in both raw and uncooked mushrooms.

Mushrooms also have a form of carbohydrate called beta-glucan which extensive research has shown to have a positive effect on the immune system, specifically enhancing the activity of natural killer cells. Beta-glucan seems to help reduce the risk of hormone-dependent cancers such as prostate and breast. And like most plant-based foods, mushrooms have anti-inflammatory properties and can be supportive of good bacteria in the intestines, which may help to positively influence the immune system.

Below are tips for selecting, storing, and cleaning mushrooms.

Learn more about the Trim Down Club.

Total Shares 0
Be the first to share this article!
* References