Rosemary: One of Nature’s Most Versatile Plants

Trim Down Club > Uncategorized > Super Foods > Rosemary: One of Nature’s Most Versatile Plants

One of the most nutritious foods are so-called everyday herbs and spices – unassuming ingredients used in recipes to add flavor, but which offer so much more than that. Fresh and dried herbs and spices offer a plethora of healthful compounds called phytonutrients, which go far beyond just improving the taste of your food.

Rosemary has a rich history

Total Shares 0
Be the first to share this article!
TrimDownClub, Aug 22, 2013 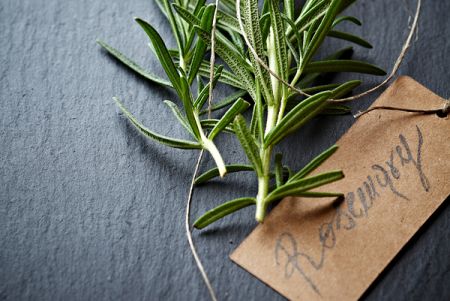 As one of the most versatile plants around – with uses ranging from aromatherapy to cuisine to medicine – rosemary, or Rosmarinus officinals, has been revered by various cultures, from as far back as the ancient Egyptians and Greeks, to the Romans to medieval Spain to Renaissance era Hungary and England. Originating in areas of the Mediterranean and Asia, the plant has spread throughout Europe, North America, and Mexico.

As a hardy evergreen perennial plant, rosemary can be harvested year round, making it easy to use as a fresh herb; alternatively its needle-like leaves can be used dried as well. Because it has a strong flavor, you only need a small amount, even in dishes that are slow cooked, as the flavor is very stable.
The more traditional uses of rosemary are with lamb and with vegetables, particularly roasted root vegetables, summer squashes, and tomatoes. A particularly robust and versatile seasoning combination is of rosemary and garlic, with or without olive oil, lemon zest, or lemon juice.

Throw a sprig or two into a bottle of olive oil for some beautifully rosemary-infused oil, which can be used in almost any recipe where you would normally use regular olive oil.

Like all herbs and spices, rosemary is rich in innumerable compounds collectively called ‘phytonutrients,’ suggested to have health-promoting properties, primarily antioxidative. These include volatile oils and secondary phytonutrients, such as rosmarinic acid, cineol, camphene, borneol, carnosol and carnosic acid – among others that nutritional science is still figuring out.

Historically, rosemary has been used to improve memory, relieve muscle pain, and stimulate the nervous system. Currently it is considered an analgesic, antiseptic, antidepressant, an anti-inflammatory, expectorant, antiviral, and natural disinfectant.

Its purported stimulating, antiseptic, and diuretic properties make it a popular tonic. It has been suggested to help stimulate bile secretion, which when bound to dietary fiber, helps to eliminate toxins from the body.

In addition to phytonutrients, rosemary has an impressive amount of iron and beta carotene, also known as pro-vitamin A: each gram of fresh rosemary (just over a teaspoon) yields nearly a full percent of the Recommended Daily Allowance (RDA) for each – surprisingly high for ‘just’ a seasoning.

Fresh rosemary is considered to be more desirable than dried, because it has a more subtle flavor. It should be stored in the refrigerator inside a plastic bag.

Dried rosemary works well, too, but because the water has been removed, the flavors are more concentrated, stronger, and more pungent – a little goes a long way. The advantage, however, is that it can be kept usable for a longer period of time than the fresh plant. Dried rosemary should be kept in a cool, dark, and dry place in an airtight container to protect it from oxidation – in these conditions, it will keep for several months.

To learn more about the Trim Down Club’s healthy eating plan, click here.