Halloween is a holiday we often associate with candy, especially in America. According to some estimates, the average American household spent about $39 on Halloween candy last year. Here’s how to navigate Halloween if you are trying to lose weight.

Total Shares 0
Be the first to share this article!
TrimDownClub, Oct 23, 2014

Halloween is a Christian, particularly Catholic, holiday that marks the beginning of Allhallowtide: All Hallows’ Eve (October 31), All Hallows (Saints’) Day on 1 November and All Souls’ Day on 2 November.

But Halloween is rooted in the ancient Celtic holiday of Samhain (pronounced “sow-in”.) The Celtic New Year begins on November 1, when the richness of the harvest season ends and the earth enters into the cold, fallow season of winter. 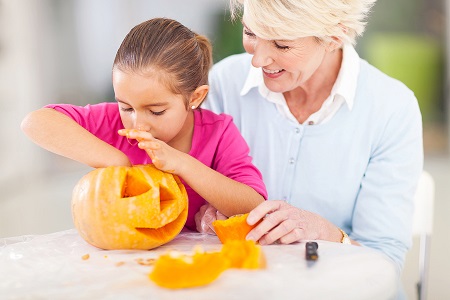 The Celts believed that this was a time when spirits, faeries, and the souls of the dead could cross between their world and the land of the living. Other cultures have similar traditions of remembering and communing with the beloved dead on specific days. These traditions were especially strong in Latin and Central America, particularly in Mexico, where the days of Allhallowtide, known as Dia de Muertos, are national holidays.

How Did Pumpkins Get Involved?

The Celts lit bonfires on Samhain. Their Scots-Irish descendants carved turnips and other vegetables with the grotesque faces of goblins, then set candles in these Jack-O-Lanterns and placed them on windowsills to warn away evil spirits or in hedges to frighten unwary travelers. They also lit Jack-o-Lanterns to aid “guisers,” generally children and poor people, who went “souling” door-to-door: singing and praying for the souls of the dead in exchange for food and other small gifts.

Pumpkins are native to the Americas. Successive waves of Scots and Irish immigrants brought their customs with them to the Americas, where they decided that pumpkins make much better Jack-O-Lanterns than turnips.

What Can I Do with Pumpkins besides Carving Them?

Pumpkins are great for you. They’re naturally low in carbs and, like all orange vegetables, they are rich in carotenes, which have antioxidant and anti-inflammatory properties. They contain calcium, iron and magnesium, as well as vitamins A, B6, C and E, amino acids.

Pumpkin pulp can be used to soothe skin inflammations: if you have dry, red or irritated skin, mix some pulp with a bit of honey. Spread on your skin and leave for 15 minutes, then rinse with cool water.

Pumpkin seeds are also rich in protein. Scoop them out, being sure to get as much of the “strings” inside the pumpkin as possible. Fry in a little of your favorite heart-healthy oil until the “strings” are brown and crispy but not burned, then lightly sprinkle with salt. We won’t tell if you decide to keep all the caramelized “strings” for yourself—they’re that good!

A little-known fact? In Australia, butternut squash, another winter squash that are closely related to pumpkins, are called pumpkins. And this little snack is totally amazing with butternut squash seeds.

But What About the Candy?

Nearly 70% of Americans are overweight or obese—and many other countries are also facing a rising tide of obesity and related conditions such as deadly diabetes and the metabolic syndrome. And we’re bombarded with advertising to eat hyper-processed, hyper-palatable foods, and sugar is the secret ingredient that keeps us eating long after we meant to stop. In fact, sugar is actually addictive for many people. An occasional piece of candy rarely causes harm in and of itself, but if you’ve successfully detoxed from sugar, eating candy can easily reignite your cravings and set back or even derail your health and weight-loss goals. So most people are just better off eating as little candy as possible on Halloween—while still enjoying the holiday.

If you feel you can’t avoid candy altogether, here are some tips for damage control:

However you choose to deal with those candy stashes, a healthy relationship with food should be part of your long-term goals for a healthy weight. After all, the holidays from Halloween to Easter are celebrated with sweet, rich food and we face birthdays and the daily challenge of how to eat good foods.

Halloween is a unique holiday because it encourages us to indulge our imaginations—so give yours free rein.

If you are Christian or otherwise interested in religion, you and your children can explore the liturgical meaning of Halloween—Catholicism and Protestantism have different traditions.

Or you can explore the pre-Christian roots of Halloween, in your own ethnic heritage, or of the Celts and Mesoamericans.

Hold a costume party, and have each guest bring a dish of Halloween-themed snacks, such as

The best treat you can give at Halloween is a sense of wonder, creativity, imagination, and yes, awe at the relationship between the living and the dead.