What’s on My Plate?

Trim Down Club > Articles > All About Wellness > What’s on My Plate?

Remember the Food Guide Pyramid? Well, it has evolved! Please welcome My Plate.

Total Shares 0
Be the first to share this article!
TrimDownClub, Nov 06, 2013

‘My Plate’ is the new diagram chosen to represent the nutritional recommendations in the United States, taking the place of the Food Guide Pyramid and My Pyramid that filled that role for approximately 20 years.According to nutrition experts and those who follow them – including United States First Lady Michelle Obama – the plate is easy to understand, child-friendly, and fits well into busy households.

The plate signifies a major change in how meals are put together, and is a clear guideline for eating properly, as opposed to the pyramid that may have provided a lot of information, but was considered too complicated to work as a quick and simple guide for most of the American public. 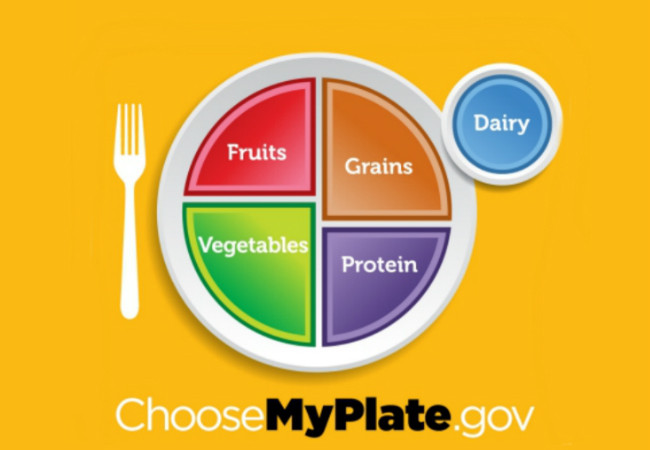 My Plate is divided into 4 simple sections to conveying the structure of what is considered to be a healthy, complete meal:

Fruits and vegetables should take up approximately half of the meal. The protein takes up the smallest volume on the plate, and the grains take up a slightly larger area, with the recommendation to consume whole grains.

My Plate is accompanied by a blue cup for dairy (or similar plant-based product), as a reminder to get adequate calcium.

My Plate comes with general recommendations, presented in a brochure entitled “Let’s eat for the health of it” (link at the end of this article):

Since eating is only a part of the big picture, the plan is accompanied by encouragement to exercise.

These recommendations are not the first and probably won’t be the last of their kind, since the government requires updating these regulations every 5 years. The nutritional recommendations have changed throughout the years, evolving with scientific discoveries and clarifications, as well as lifestyles.

Up to the late 1960s, the emphasis had been on eating to avoid malnutrition. But since the 1970s, too little food was hardly the problem anymore, and attention shifted to the opposite and its consequences – overeating and related diseases. Guidelines began stressing avoidance of excess in general, and saturated fats in particular. Ironically, as obesity rates around the world continue to climb, research has found that many of the affected individuals actually have multiple nutrient inadequacies due to an unbalanced diet.

In 1992, the United States Department of Agriculture (USDA) Food Guide Pyramid was first published, based on similar diagram design in Sweden in 1974. The base of the pyramid contained bread, grains, rice and pasta, which meant they were the foods most recommended for eating.

Since then, nutrition research has progressed and shifted the emphasis to fruits and vegetables in nearly all people, to emphasizing protein’s equal importance to starchy carbohydrates, especially in people with certain predispositions, and to less of a quantitative limit for fats, while encouraging ‘good’ fats. In short, it is increasingly acknowledged that while there may be a common basis for human nutrition, varying characteristics and lifestyles among humans mean somewhat different needs.

In 2005, the new pyramid was published – called ‘My Pyramid. In this version, the emphasis was on personal customization, daily exercise, and diversity. It may be too early to depart from the pyramid entirely, so the USDA plans to keep it and its accompanying tools online for anybody who finds them useful.

The Food Guide Pyramid has been adapted to different languages and cultures for different countries around the world, with the same fundamental nutritional messages, even as it has been tailed fit into the habits and customs of each. Examples include the Wheel in Spain, The Stairs in France, The Plate in England, and The Pagoda in Japan. Within each country, the pyramid is sometimes modified for subpopulations, such as vegetarians, the elderly, and small children. Given the far reach of the Pyramid principles, as well as the user-friendly nature of its successor, it may be only a matter of time before My Plate goes widely international, too.

Will “My Plate” have more wide-ranging impact than the Pyramid? We will only know in a few years if these new recommendations have proven themselves and actually helped the American public and similar cultures to eat and get healthier, and has succeeded in holding back the obesity epidemic while ensuring nutritional adequacy.

Learn how the Trim Down Club can make YOUR plate simple and easy.