What is Ezekiel Bread and How to Make it at Home

Why do we seem so obsessed with getting rid of a food that has sustained us for thousands of years?

Total Shares 0
Be the first to share this article!
TrimDownClub, Sep 17, 2015

Every civilization had its own form of bread, and thanks to globalization we now have access to Indian naan, French baguettes, and Middle Eastern pita. Though cutting all grain-inclusive bread out of your diet may be warranted for some people—such as those with FODMAP* sensitivity—the rest of us can decide which breads are really doing the most for our health.

Some of bread’s bad reputation stems from the various degrees of difficulty in digesting grains. Some people take issue with the fact that in many western countries our wheat crops have been genetically modified to be more profitable and less healthy. The biggest problem with bread, though, is simply that we eat too much of it. The typical modern diet might include a biscuit for breakfast, a sandwich for lunch, and rolls on the side for dinner. All those bread products are most likely from grain-based products full of added sugars, artificial flavorings, and GMOs, and with much of the natural nutrition stripped out. All the processing our flour goes through destroys nutrients such as vitamin E and fiber, and at the end of the day we’re left with too many simple carbohydrates and not a lot of real value in them.

What is Ezekiel Bread?

And then there’s Ezekiel bread. Ezekiel bread, also called bible bread or manna bread, comes from the verse Ezekiel 4:9 in the Old Testament: “Take wheat and barley, beans and lentils, millet and spelt; put them in a storage jar and use them to make bread for yourself.”

Ezekiel bread is made of wheat, millet, barley, spelt, soybeans, and lentils. That’s four grains and two legumes—already far more than you’d ever expect to get in a loaf of white bread. As great as that is, the best part of Ezekiel bread is actually not just which grains are present, but how they were processed.

The Benefits of Sprouted Whole Grains

Ezekiel bread is made with sprouted whole grains, which you may remember from the last time we talked about sprouted whole grain bread here at Trim Down Club.
Grains sprout naturally, and it’s the first step in their development when left under the right conditions. Sprouting activates natural enzymes that not only make the grain more easily digested but also reduce the presence of “anti-nutrients.”

Anti-nutrients—including compounds such as phytic acid—inhibit the absorption of nutrients by binding up minerals like zinc, magnesium, iron, and calcium. Once you’ve reduced the amount of anti-nutrients in your bread (by allowing the grains to sprout), you’ll be left with a bread that can pass on nutrients and be easily digested. This in turn benefits healthy weight management, by improving the way your body processes energy.

Finally, a word on gluten. Allowing your grains to sprout will somewhat decrease the presence of gluten. While this will make sprouted whole grain breads such as Ezekiel bread much easier to digest for many people, it’s still completely off-limits for those living with celiac disease—though it may be tolerated by individuals with non-celiac gluten sensitivity (NCGS).

How Healthy is Ezekiel Bread?

The grains and legumes found in Ezekiel bread together create a complete protein like that found in milk and eggs. Ezekiel bread doesn’t contain any preservatives or sweeteners, and the carbohydrates in the grains are converted into maltose—a sugar that is absorbed very slowly and aids in digestion. Due to the high fiber and low level of sodium, Ezekiel bread can promote cardiovascular health.

The glycemic index (GI) is a way of finding out how quickly carbohydrates are broken down into simple sugars after consumption. Ezekiel bread has a low glycemic index, which means that it breaks down very slowly and its release of sugar into your bloodstream is gradual—in other words, the opposite of a sugar-high. This provides a sustained increase in blood sugar, keeping you energized for hours after you’ve eaten. Ezekiel bread is a good choice for those who suffer from type 2 diabetes, because it keeps them from experience the sudden spike in blood sugar that is common in many other foods.

To get a fuller picture of Ezekiel bread’s nutritional value, here’s a list provided by Food for Life (the company behind store-bought Ezekiel bread):

Most store-bought breads are made of refined grains or whole grains pulverized into flour soon after drying and well before baking—with the added disadvantage of inviting harmful oxidation. Ezekiel bread, however, is made of six different all-natural ingredients in a form that is both less risky and easier to metabolize:

Perhaps most crucially, all grains and legumes used in Ezekiel bread are sprouted before being processed. Given that you know the importance of sprouted whole grains in the effort to reduce anti-nutrients and improve digestion, you have two choices. One option is to go to the store and pick up a loaf of Ezekiel bread, guaranteed to be made from sprouted whole grains. Another option is to sprout your own grains from home!

How to Sprout Grains for Flour

Sprouting grains and legumes may sound like it involves some sort of green thumb or even gardening space, but it doesn’t. With these simple steps, you’ll barely even get your hands dirty.

How to Make Ezekiel Bread

Ezekiel bread is available for purchase in grocery stores, but if you’re interested in going the homemade route then here’s the way to do it. Note: all grain and legume amounts/weights below are for dried ingredients.

2. Mix the grains with legumes. Grind them in a grain mill (or use a blender on high for several minutes) to make your flour, and then place the flour in a mixing bowl. 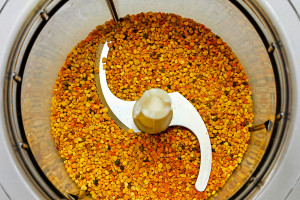 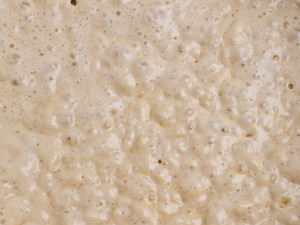 4. After that time has passed, add the remaining flour mixture and the salt. Stir until thoroughly mixed. The mixture will look more like cake or cookie batter than standard bread dough. 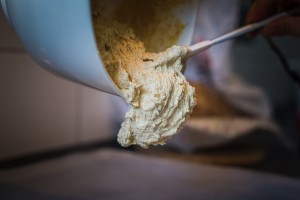 5. Grease two 9×5-inch / 23×13-cm loaf pans with the remaining oil. Pour in the batter mixture, and set aside in a warm place for about an hour to let it rise. 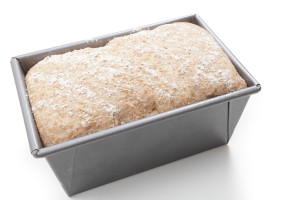 6. Place pans in preheated oven, and bake for about 50 minutes, or until loaves are golden brown. 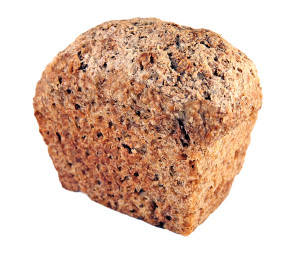 Store tightly wrapped in a cool, dry place. Will keep for up to 3 days unrefrigerated, 2 weeks refrigerated; freeze for indefinite storage.

As we’ve seen, the right bread can take away some of the fear for people who don’t suffer from FODMAP* sensitivity, celiac disease, or NCGS. Take the time to do your research. Learn which flours to stay away from, and learn about alternatives that pack in more nutrition than you expected. Good finds like sprouted whole grains and Ezekiel bread can keep you healthy and in the bread game.

Watch our presentation and join the club!