Trim Down Club > Articles > All About Wellness > Food Addiction: Identification of a New Phenomenon

Addictions in general aren’t considered a new phenomenon in our world; however, it appears that a new addiction is rising: food addiction. New research that was conducted in this field has shown that food addiction meets all the criteria of a known substance addiction.

Total Shares 0
Be the first to share this article!
TrimDownClub, Mar 28, 2013
The “overeating” phenomenon has listed the availability of food, a sedentary lifestyle, and economic constraints as explanations. 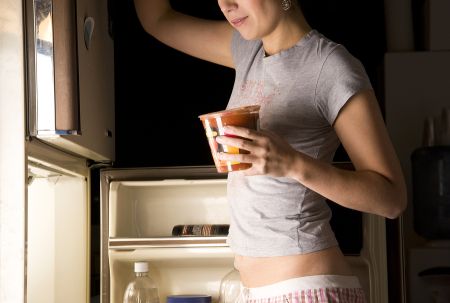 And yet, none of these explanations answers the main question: why do people consistently over eat, despite repeated efforts to change this behavior? Or, in other words, is there such a thing as a food addiction?
A team of researchers led by Dr. (first name needed) Ifland, recently published an article in the medical journal, Medical Hypotheses, l that proposed a possible answer to this question.  The researchers are examining food addiction and overeating while in relation to processed food with high concentrations of sugar, fat, salt, and caffeine;an addictive substance. Processed food leads some of us to lose control of our ability to balance our diet (food addiction), similar- to alcohol and nicotine addictions.

The researchers’ assumption was that in some cases, overeating results in an addiction to processed food. This assumption developed through critical reading of professional literature in the fields of weightgain, eating behaviors, and drug addictions, and by working with people who described themselves as processed-food addicts.

As in addictive drugs, sugars and flours are substances found in nature in smaller amounts than those that can usually be found in pharmaceuticals or food respectively.  Like addictive drugs  they’re not addictive until they become concentrated together through modernized industrial processes.  The combination of these food components in higher concentrations than those found in nature creates foods with high addiction potential such as: sodas (sugar and caffeine), doughnuts and other pastries (white flour, sugar, caffeine in some cases, chocolate, salt, and fat), and French fries (fat, salt, and dextrose in some cases).

What is addictive substance dependency?

The Diagnostic and Statistical Manual of Mental Disorders (or in short DSM-IV) defines substance dependence when 3 out of 7 symptoms appear  in a year:

These criteria were validated regarding different materials and in different populations.

Overeating can be described as a processed-food addiction according to the DSM-IV criteria  on substance use disorder.
The researchers presented the concept of processed food addiction, referencing  the definition of substance addiction. Arguments establishing their hypothesis were derived from two sources:

A.  Observation and working with people who describe themselves as processed food addicts.

B.  Critical reading of professional literature.

1. Food addiction: the appearance of tolerance brings on progressive usage over time
Two scenarios are noted: the need to raise the substance amount to achieve the desired effect; the  compulsion  to consume  larger amounts of a specific food over time to achieve the desired effect.
The type of food people report causing this need exists in variable and growing amounts – fast food, ice cream, salty snacks, soda, and popcorn.
For example, “If I tell myself I’ll only have one cookie, and it leads to eating another one and then another one, until I stop at the fifth or sixth cookie. In the past I used to be able to only eat one or two.”
Three levels of research support the progressive abuse of food: lab animal studies,  MRI studies of neurotransmitters  related to people’s eating, and  consumption statistics of food ingredients.

2. Food addiction: withdrawal symptoms
This is when  the substance (or a similar substance) is consumed in order to relieve or avoid withdrawal symptoms.
This is based on reports of people eating when feeling tired, anxious, depressed and/or upset, and irritated.  Also, eating processed food to avoid weakness and a bad mood.  One eats  even though  there is no conscious feeling of hunger, and the fact that eating will not alter mood.  There are reports of repeated behavior such as walking towards snack and soda vending machines in the afternoon, roaming the kitchen restlessly while searching for a processed snack, or eating ice cream at night.

The negative feelings described are psychological expressions of withdrawal that are “fixed” by consuming processed food, similar to smoking cigarettes.

For example, “Reducing amounts of bread makes me jitter.” Or “When I don’t dring coffee for a whole day I become agitated.” Or “I eat food high in sugar to ease my fatigue and/or my depressed mood.”
People’s testimonials describe withdrawal symptoms from salt as nausea and from caffeine as headaches, weakness and dizziness.

3. Food addiction: eating more than plan
The substance is usually eaten in larger amounts or for a longer period of time than was planned.   This is based on reports of people planning to go to the bakery to buy one cookie or one snack and leaving the store with a dozen; then, eating it all within a couple of hours or less.   It’s also based on reports of  expressions  of wonder and disbelief  at what happened.
For example,“I can’t believe I ate the whole thing.”   Or “It seems that one bite of chocolate led to a frantic and out of control stuffing chocolate into  my mouth.  It was like trying to put out a fire.”

There is  general scientific agreement supporting  the existence of binge eating.

4. Food addiction: attempts to reduce consumption
There is an  irrepressible desire or unsuccessful attempts to reduce or control the consumption of the substance.  This may be: reducing amounts of food, hypnosis, food substitutions, group therapy, surgery, medical treatment, acupuncture, “special food,” prayer groups,  or exercise. The common theme is failing at all those attempts.
For example, “Yes, I tried to reduce or stop, but it’s always in my head and I find ways to defeat myself, I even find time to buy a snack or something sweet.
The foods that should be targeted  to  reduce are processed foods.

5. Food addiction: taking the time to convince, use or recover from using
A lot of time is devoted to acquiring the substance,  use it, or to recover from using it.
This is based on reports of multiple entries and exits of the kitchen, the living room, and the bathroom, and even reports of getting up at night to eat.  Other consistent reports were of weariness after meals and dedicating the whole weekend for shopping, eating and sleeping afterwards.
For example, “I can feel hungover from chocolate.”  Or, “I can have a lot of  plans for the weekend, but instead, I’ll spend  it shopping at the supermarket,  then eat what I bought and sleep it off.”

The main ingredient related to overeating here is the weariness and fatigue accompanying the frantic food consumption.  This response to eating processed food  is similar to watching television and/or using the internet and  a decline in exercising.

6. Food addiction: missing out on important activities
Social, employment, or vacation activities are cancelled or reduced because of substance use  Reports of being alone because of feeling ashamed of being fat, or  weariness and fatigue.  Another common reason for abstaining from activities is feeling uncomfortable  about eating around other people.
For example, “I don’t go out anymore because I don’t like how big I am, and I just don’t have the energy for it.”Or, “I get home and eat, and then I don’t have the strength to exercise.”

7. Food addiction: overeating despite knowing the results
This criterion is described as continued substance usage, despite the knowledge that persistent and repeated physical and psychological problems are caused and will  be aggravated by such substance usage.
For example, “The thought of it being better for me to not eat something occurred to me, but I still do it.   Or“I think I should eat something because:

Someone made it for me
Just this one time can’t be harmful
I’ll start a diet tomorrow
I think about being overweight and lazy but eat it anyway.”

Obesity is a health situation, which  leads to being medically advised to lose weight.  Research shows that people usually have a hard time  heeding that advice.  To that, many men and women  also report  being in the process of losing weight, or trying to maintain their weight.  The lack of success does not reflect a lack of knowledge of the health consequences  of obesity.

It  appears that those who describe themselves as food addicts  have behaviors that verify the DSM-IV criteria for substance addiction.  Many attempts to lose weight don’t respond to existing treatment approaches.  Processed food addiction can be a significant explanation for this failure, which  applies to a significant number of people suffering from obesity.  The existing experience in treating people  addicted to tobacco and nicotine can  influence changes in the clinical-therapeutic  regimen for those people addicted to processed food.

Learn more about how the Trim Down Club can help you lose weight.