Eating in Front of the Computer? Be Warned

Trim Down Club > Recent Studies > Health & Wellness > Eating in Front of the Computer? Be Warned

So you’ve already heard about the connection between watching TV and gaining weight. Good. But what about eating in front of the computer? Well, according to a new study, that too can ruin your diet.

Total Shares 0
Be the first to share this article!
TrimDownClub, Aug 14, 2012

Obesity and overweight people are a worldwide common phenomenon, and a change in lifestyle habits is one of the main reasons for this. These last few years have shown that the weight gaining plague isn’t caused only by the lack of exercise and/or excessive consumption of calories, but also by televisions and computers. 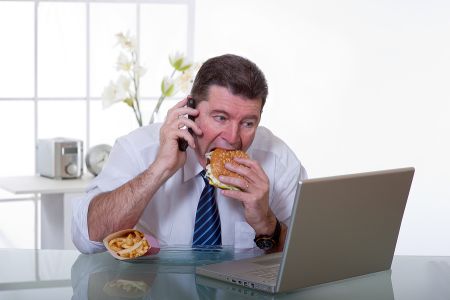 Watching television can cause weight gain through various mechanisms.

First of all, while you’re watching it, you’re not doing anything else to spend high amounts of energy. While you’re watching television, your metabolism slows down even more than it does during other “sitting activities” such as reading or writing.

Television encourages over-eating out of boredom which is a response to the unstoppable exposure to food. Even the cooking television shows, that have become very popular, and food commercials (of mostly candy and junk food) cause excess eating and unhealthy eating habits.

So it’s obvious that lounging in front of the television while munching on snacks can cause you to gain weight. But what about the computer? According to a new study, eating in front of your computer can also ruin your diet.

A diversion can be eating in front of the television instead of sitting by the kitchen table, and it can also be a shared meal with friends while conversing or eating while listening to a recorded story.

The reason for this can be the lack of attention to what you’re putting in your mouth, which can affect how full you’ll feel later. The new research shows that the effect of the distraction can be meaningful and the effects can be felt well past the meal time.

The researchers hypothesize that when the “meal memory” is weak we tend to eat more food in the following meal.

The research included 44 subjects who were divided into two groups.
In the first group, the subjects had lunch while playing solitaire on the computer, while the other group had the exact same lunch, but with no distractions.

30 minutes after the meal, the subjects took the “cookie test” during which they could have as many cookies as they wanted, and they were also asked if they could recall all nine foods they had for lunch and the order in which they were served.

The subjects who had lunch in front of the computer had an average of 5 cookies while their fellow subjects had only half of that. In addition, they had a harder time remembering the order the food was served during lunch, and usually reported feeling less full after lunch.

The study’s findings show that having distractions during a meal can explain the strong craving for cookies or other snacks after lunch.

It’s important to remember that the research was held in a controlled environment; therefore it’s not entirely clear whether the findings are also true in “the real world”, where many factors can affect what and how much we eat. Other research is required in order to understand this effect fully. However, in the meantime you might want to avoid eating absentmindedly. Even if you are a full fledged multi-tasker, you still might want to take the time and pay attention while you’re eating, and not eat in front of the computer or television.

The Trim Down Club Menu Planner makes it easier to stick to a healthy eating plan by giving you balanced meals and snacks throughout the day, based on the foods you enjoy that are also good for your body. Click here to learn more.